The Exquisite Corpse > recomposing the body

New Emergences present a new commission, working with sound, image, text and movement. The composition is inspired by the game known from the Surrealist art movement, where a completely new body is built out of separately drawn parts. Four musicians, a visual artist and a performance artist will enter the game, and generate a score in real-time, exploring the discrepancies and frictions between our relationship to our bodies and society’s ideal norms.

The live generated score was developed at iii Workspace.

The performance was premiered at Splendor, combined with a panel discussion between makers, artists, thinkers and audience, to explore the themes of chance, acceptance, body differences, reflection, self-identity, and androgyny as alien or ideal.

The Cadavre Exquis (Exquisite Corpse) was a counter-narrative to the notion of the ideal body that resulted from the rise of 18th century thought in both aesthetics and science. Explored as a collaborative game technique, it was invented in the early 20th Century by Surrealists André Breton and Paul Eluard. The game assembled words, composed sequentially by simple rules, or randomly, by only seeing the ends of the previous contribution. Later on, drawings/graphics were introduced.

As the concepts of “female” and “male” were beginning to reconcile again, the Androgyne came to become the personification of the ideal. In later years, the Australian sociologist R.W. Connell, in her book Masculinities (1993 / 2005): Degendering, presented a strategy of “degendering” as a means for social justice in gender relations, and/or to free the association of gender-referencing on the body itself, and further to the level of culture and institutions.

When we compare Surrealism to Japanese Butoh, both movement/art-forms emerged as an artistic response to the physical and psychological traumas of the World Wars. Physical trauma necessitated the advancement of prostheses which replaced missing limbs; masks which re-structured facial injuries; and the phantom limb syndrome. For both, the body served as a visceral site for confronting its materiality, its fragmentation, and its re-suturing into new forms. These new forms paved the way for deeper perceptions of ourselves, our culture and our corporeality.

1. A short documentary by Shinichirou Nakashima

A dancer (KUSUDA Kenzo) becomes an inhabitant of a landscape made of porcelain. The dancer’s contour directs the eye along a visual and sensory exploration of landscape, spaces and shapes. Footage filmed on location in Japan merges with patterns, photographs and various objects, forming a make believe present and showing a glimpse of how a future based on the past might appear.

Problems faced by local cities in Japan include the declining birthrate and aging population, population concentration in large cities, and financial difficulties. The key to solving the problem is to increase the settled population (migrants) and the exchange population (tourists), but to do so, it is necessary to build a city identity that leverages the strengths of the region. This is because the uniqueness of the city makes it attractive and the driving force for attracting migrants and tourists. The usual method of community development is to solicit residents and related parties, discuss the future image of the city at workshops, etc., gather opinions in words, and create concrete measures. However, this method does not often result in actual measures. Therefore, as a new method of town development, we propose to "create art as a medium for sharing the future image of the city." A practical example is the FUTURE ARITA project in Arita Town, Saga Prefecture.

According to the French philosopher Elie During art suggests various possibilities of the future as "prototype". Residents, stakeholders, and students involved in urban planning of Arita Town discuss the future image of the city. Based on the outcome of the discussion, the invited artists express the "future Arita scenario," imaginary cityscape and urban life in the future of Arita town by means of painting and video projection on fusuma, typical Japanese paper sliding doors.

The art work will be permanently exhibited at the heritage "Egoshi House" and was appreciated by various people. Results of the enquete to the visitors of the artwork indicated that the future image of the city, which is difficult to share with words alone, has become easier to imagine by taking the form of art, and it has become easier to share it with more people. It is concluded that discussion about town development was activated, which lead to concrete movements for town development. The method of community development through art has created an intimate relationship between community development and art in the future,

Concept Advisor to the both art works: Yoko Taguchi and Yuusuke Karasawa (architecture and city planning) 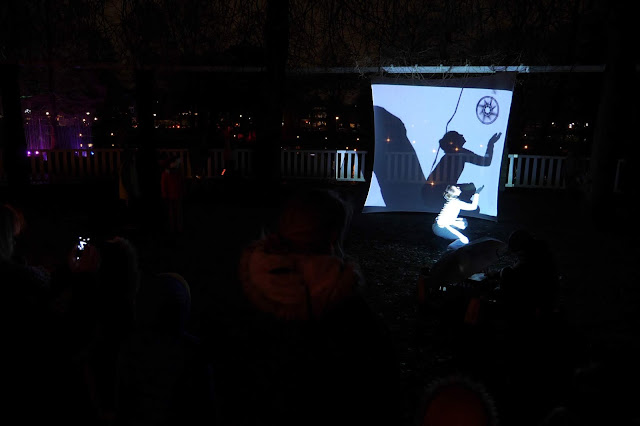 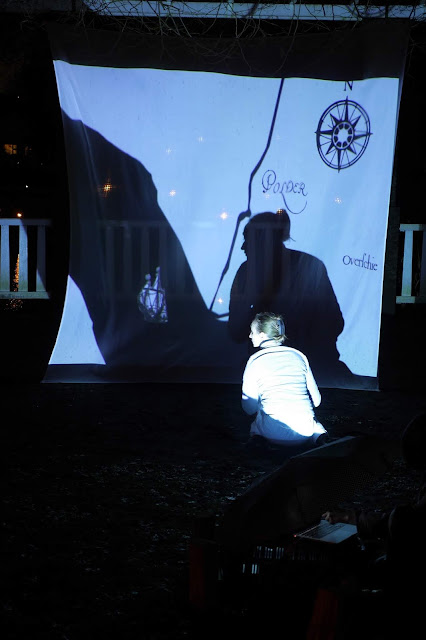 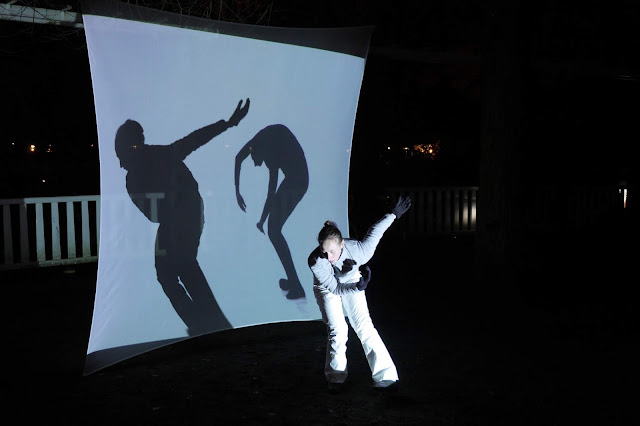 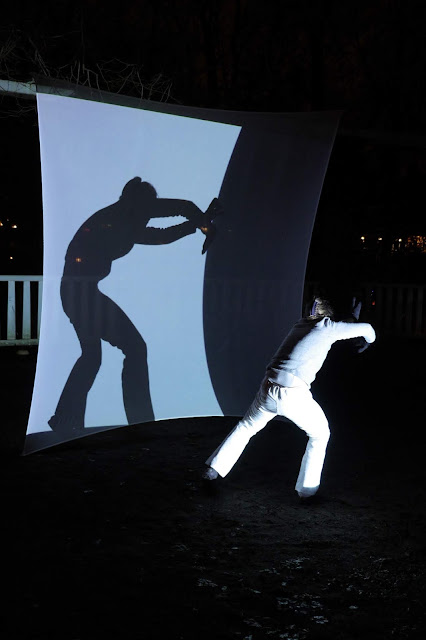 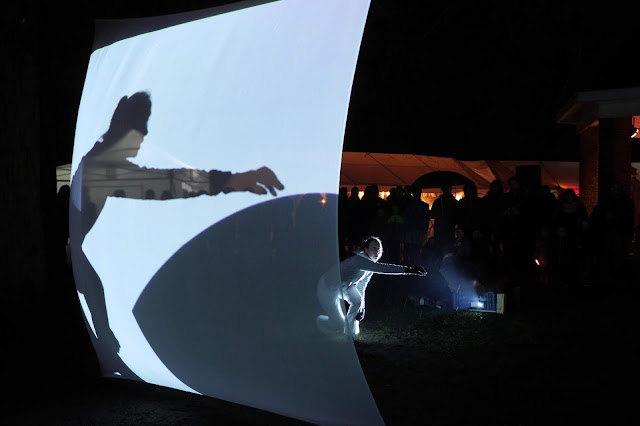 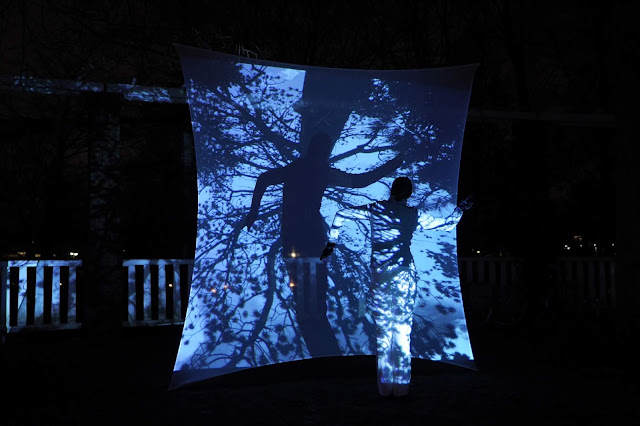 RUIN from Paul Glazier on Vimeo.

Motion Gesture is a live performance that combines body movement with live projection and live filmmaking. Cramer responds to Endo's movements by drawing with a black marker on a blank 16mm film loop; the slightly delayed projection will reciprocally be used by Endo as a graphic score. 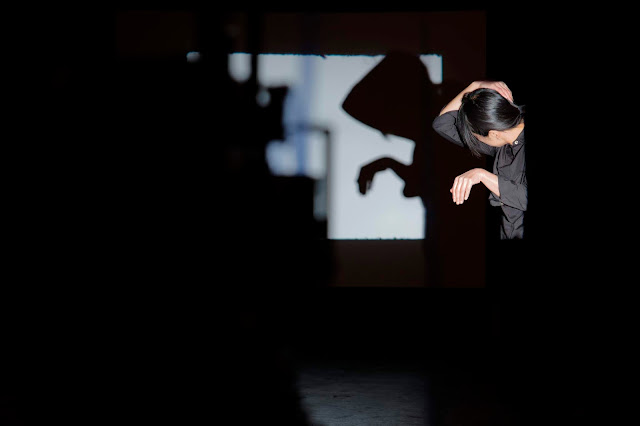 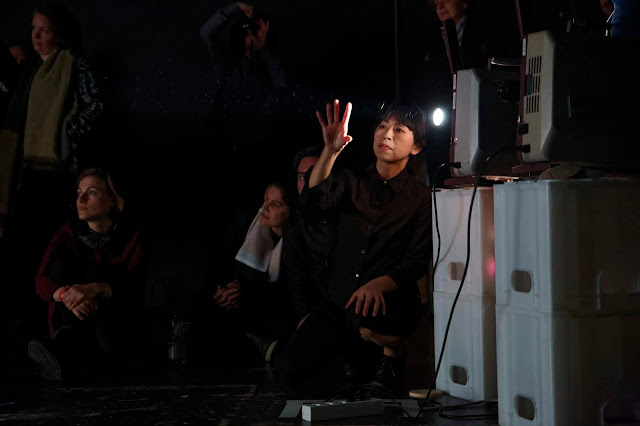 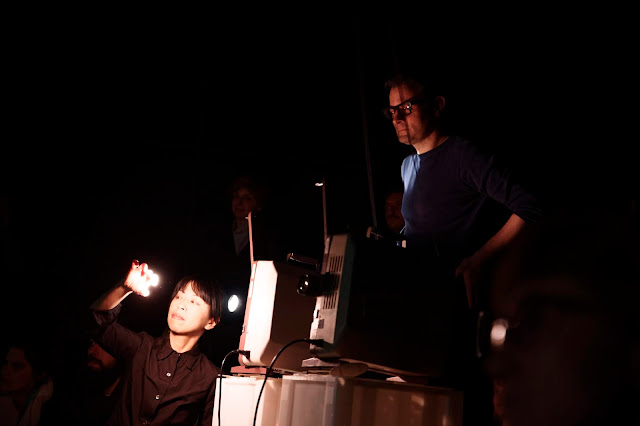 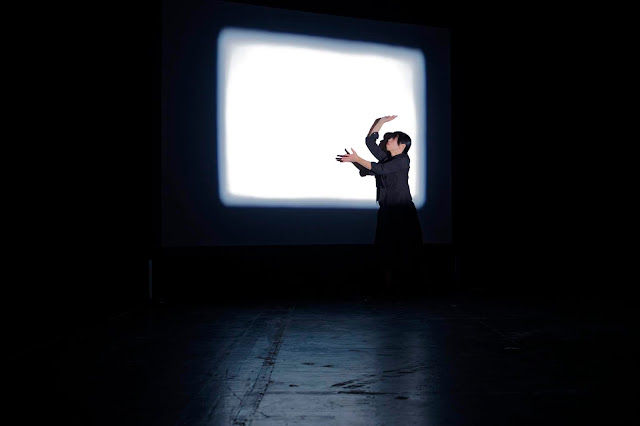 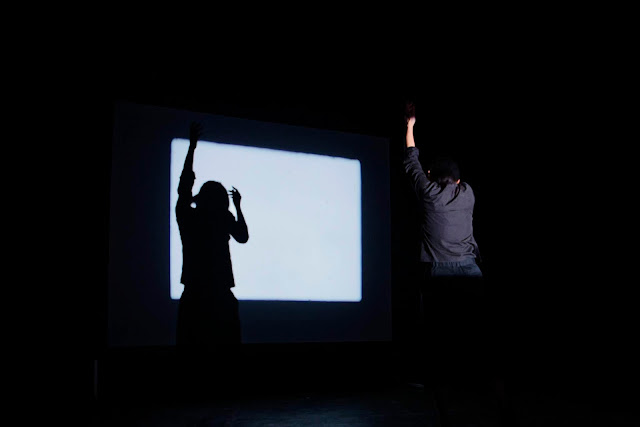 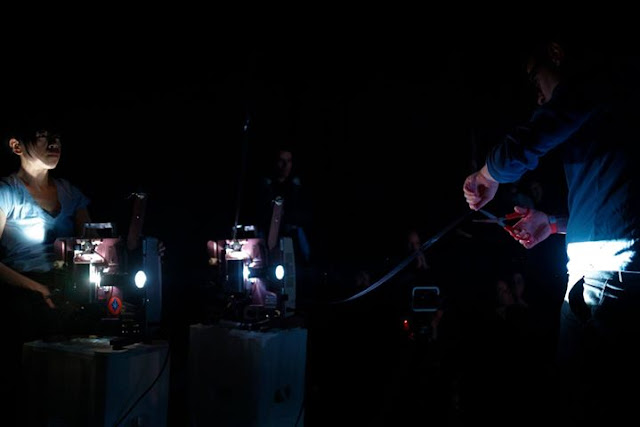 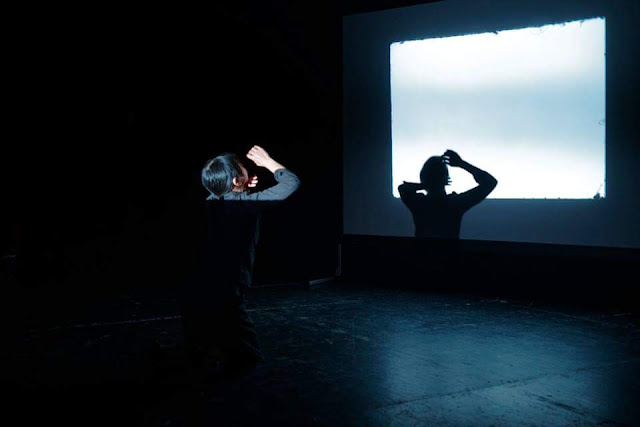 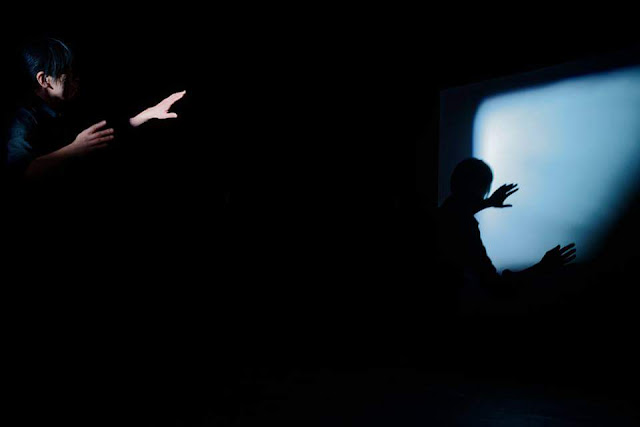 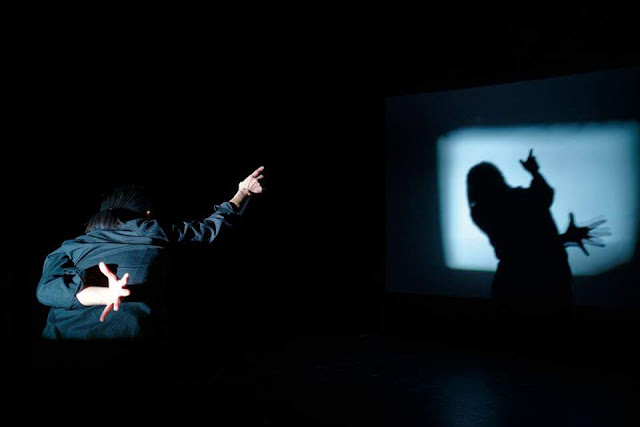 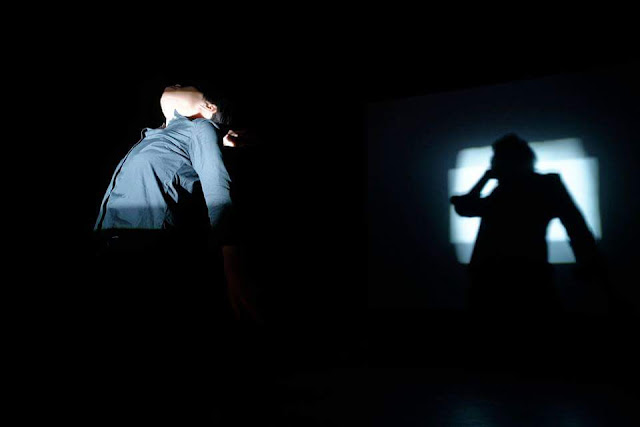 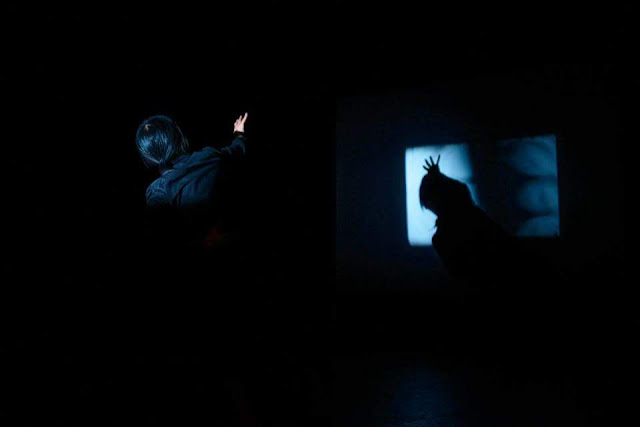 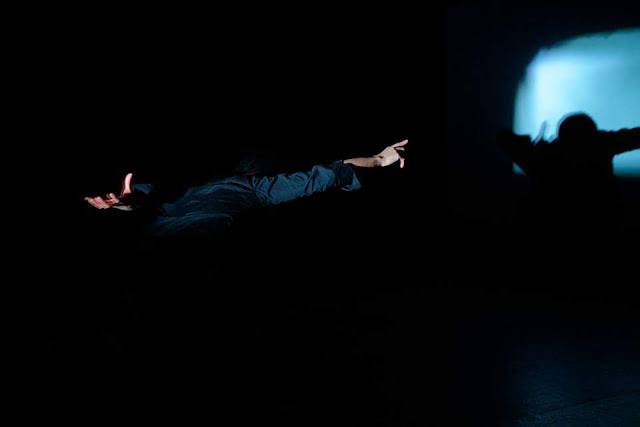 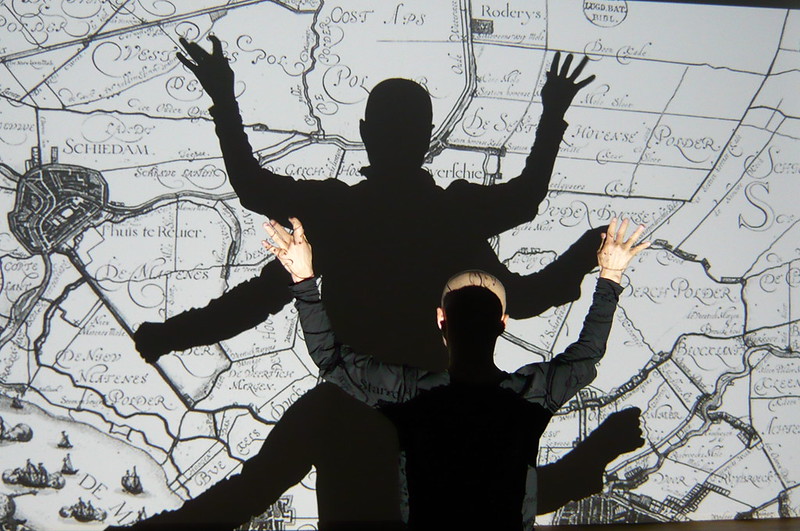